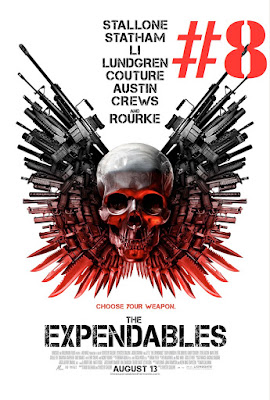 Grab your badass beret and throwing knives because this week hosts Cam Smith and Tony G are enlisting with Sly and the gang in order to revisit 2010's superstar team-up adventure The Expendables. Directed by Stallone, the film, which mashes up a collection of iconic tough guys including Jason Statham, Jet Li and Arnie (sorta?), was originally conceived as being the epic dream project every 1980s action fan longed to see become a reality. But did it deliver? And how does it hold up long after the hype has faded? Recover a piece of your soul by listening in as the duo reflect on the lop-sided star power of the cast, frequently bizarre dialogue and go-for-broke visceral brutality.

We'll be back in two weeks with Red Sonja!
Posted by Arniegeddon at 4:45 PM