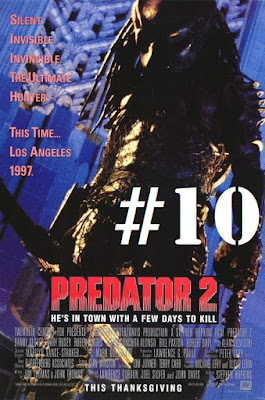 Untangle your razor nets and dust off your discus because this week hosts Cam Smith and Tony G are boldly wandering into a dystopian urban warzone in order to tackle this Arnie-less sequel to the 1987 classic. Despite being viewed upon release as an underwhelming follow-up, has time been kind to the title antagonist's second hunt? And how successful is the film's shift in setting and its expansion of predator mythology? Come hang out with the duo in the metaphorical meat locker as they go back to the terrifying gang-run future of 1997 and strive to wrap their heads around Danny Glover being a logical replacement for the mighty Schwarzenegger!

We'll be back in two weeks with The Running Man!
Posted by Arniegeddon at 4:57 PM