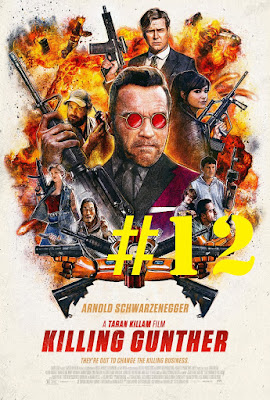 Mug for the camera and embrace the post-modern because this week hosts Cam Smith and Tony G are conjuring up their frustrated inner-country stars while partying with the 2017 indie comedy Killing Gunther. Starring our beloved muscle-bound icon as a legendary killer-for-hire being pursued by a colorful batch of wacky assassins, the film sees Schwarzenegger goofily sending up his big screen persona while also striving to further refine his comedic chops. But is he successful, and does the picture deserve his fearless commitment? Jump into the kooky chaos with the duo as they ask such fundamental questions as "why is this a mockumentary?," "should Arnie stop milking his famous catchphrases?" and so very much more.

We'll be back in two weeks with Twins!
Posted by Arniegeddon at 3:40 PM