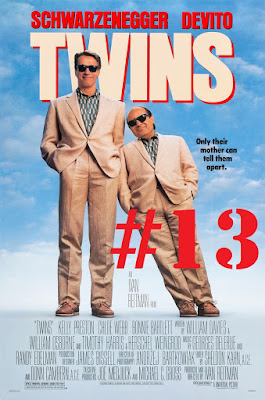 Iron your tan suits and slip on some over-sized sunglasses because this week hosts Cam Smith and Tony G are reviewing, in hilarious unison, Arnold's huge comedy crossover smash Twins! Famously starring Schwarzenegger and Danny DeVito as unlikely brothers on a wild road trip search for their mother and a quick escape from the mob, this Ivan Reitman-helmed flick was once unavoidable on television and seemingly beloved. But was that actually the case? Or have we all been blinded by nostalgia and selective memories? Hop in the red convertible and regale as the duo grapple with classic 1980s tropes, convoluted crime subplots and impromptu "Yakety Yak" singalongs.

We'll be back in two weeks with Hercules in New York/Hercules Goes Bananas!
Posted by Arniegeddon at 12:06 AM