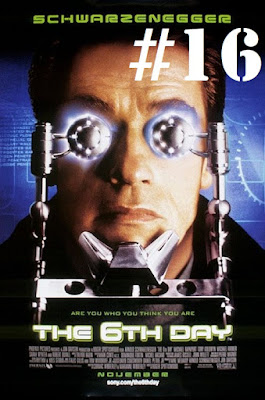 Crawl out of your Y2K bunkers and leash your replicated pets because this week hosts Cam Smith and Tony G are flashing back to a future filled with creepy robotic dolls, heli-glider hijinx and bone-crunching XFL football with 2000's box office under-performer The 6th Day. One of Arnie's transition films, marking a shift away from violent superheroics to more grounded everyman action, this clone thriller made little impact upon release. But did it get a raw deal? Is it perhaps a legitimately interesting entry in the big guy's sci-fi canon alongside classics like Terminator and Total Recall? Or does it just stink? Strap yourselves in as the duo ponder the film's hazy legacy, and obsess over Tony Goldwyn puns and the waking horror that is Cindy the SimPal.

We'll be back in two weeks with The Expendables 2!
Posted by Arniegeddon at 2:10 PM