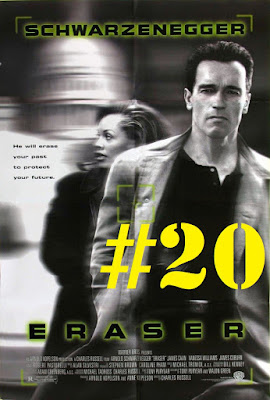 Patch up your aquariums and wrestle some crocodiles because this week hosts Cam Smith and Tony G are reliving summer 1996 with Arnold's big-budget action movie follow-up to True Lies! Directed by The Mask's Chuck Russell, Eraser was originally intended as a slick, violent showcase for state of the art technology. So how has it aged? And how successful is the film at grabbing the baton from James Cameron's classic spy thriller, which blew up the box-office two years prior? Dive into the mayhem with the duo as they ponder the inner workings of witness protection programs, 1990s computer hacking and so very much more!

We'll be back in two weeks with Arnie's lost projects!
Posted by Arniegeddon at 10:12 PM