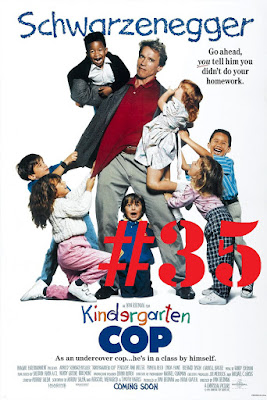 Thwart a lunch theft and kick off an "Old MacDonald" sing-a-long because this week hosts Cam Smith and Tony G are trudging back into Arnie comedy territory with 1990's Kindergarten Cop! Directed by Ivan Reitman, this big box-office hit spawned a dozen iconic catchphrases, many of which wound up on oft-used internet soundboards. But are there still laughs to be had from the material almost two decades later? And does the film's odd mixture of wisecracking kid antics and dark mature themes still hold up? Pay attention cause this class is in session!

We'll be back in two weeks with Arnold vs. Sly!
Posted by Arniegeddon at 1:42 PM