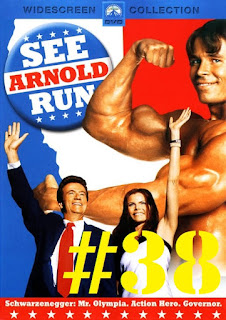 Study up on your water policy and hit the campaign trail because hosts Cam Smith and Tony G are going toe to toe with the A&E biopic See Arnold Run! Televised in January 2005, this no frills production takes viewers behind the dramatic scenes of Arnold's successful governorship run, as well as into his early pre-stardom days on Muscle Beach. But does it do either of these eras justice? And are the talented actors tasked with recreating the legendary icon able to pull off this seemingly impossible task? Tune in and find out if this film is a hidden gem or better off remaining buried.

We'll be back in two weeks with Escape Plan!
Posted by Arniegeddon at 8:13 PM