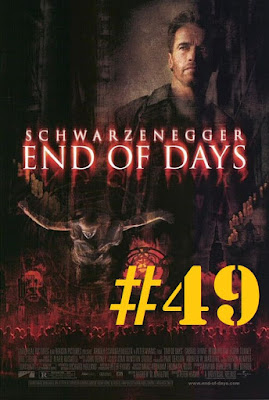 Knock back a revolting smoothie and shout at the devil because hosts Cam Smith and Tony G are setting the world ablaze with a timely rewatch of Arnold's Y2K-influenced horror actioner End of Days! Directed by journeyman extraordinaire Peter Hyams, this supernatural thriller was plagued with terrible reviews back in the fall of 1999. But has the film aged better than expected? Or does the whole Schwarzenegger vs. Satan concept still come across as dopey? Take a break from headbanging to the movie's nu metal-heavy soundtrack album and tune in!

We'll be back in two weeks with a tribute to Sven-Ole Thorsen!
Posted by Arniegeddon at 11:48 PM